Just a Little Oscars Vent for the Road 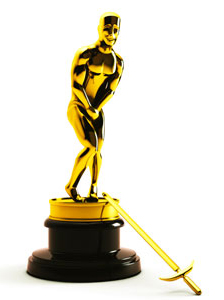 If Bud Selig secretly ran the Academy of Motion Picture Arts and Sciences, I would not be surprised. For like every grand spectacle dropped in MLB’s lap, both institutions have a knack for taking the choicest prime rib and turning it into Hamburger Helper.

Last night’s Oscars telecast was just the latest in their series of bloated, unwatchable travesties, this one coming in a year that featured at least four timeless films (Social Network, King’s Speech, True Grit and Toy Story 3) and a couple of madly inventive ones (Inception and Black Swan). Having darling young’uns James Franco and Anne Hathaway host the show was a nice idea that went mysteriously flat and was ultimately bulldozed by the typical octogenarian pacing. As I tweeted during the broadcast (Twitter being the only activity that saved me from disappearing to the kitchen by the second hour and overdosing on Chinese takeout), whoever made the decision to haul Kirk Douglas out to present a major acting award “should have been fired, then re-hired and fired a second time.” Capped by Melissa Leo’s sickening acceptance speech, it had to be the worst Oscars sequence of all time.

Then there was the time-honored disgrace of swelling up the orchestra to boot “lesser” award winners off the stage early in their speeches. Even Aaron Sorkin, who can write screenplay circles around 97% of the scribes in Hollywood, and had memorized a gracious, concise speech ahead of time that wasn’t a second too long, was given the cane-around-the-neck treatment, while a rabid blowhard actor like Leo was left out in the yard unleashed.

What a time-sucking farce. And naturally, I’ll be watching again next year.

On to more important matters. The Bragging Rights League now has an official launch date of March 14, and I’ll be back here with the official link that morning. My funkyball77 Twitter account will morph into something else at that time, and followers will be automatically taken along for the ride.  Subscribers to the blog here will need to re-up their accounts.

It’s been kind of weird lately, not having to roll four games a night. And being able to read more books.  I can get used to this less-frequent blogging thing.

But I won’t. You know me. Still on schedule for a mid-March launch of The Bragging Rights League, right after returning from Florida for family visiting and my first actual live ball game of the year (Twins vs. Orioles, woo-hoo!)

Had an awesome time in the Big Frozen Apple last weekend, joining the scene at Strat’s 50th Anniversary bash (see Hal Richman disciples below). If you haven’t read it yet, here’s my account of the event for The Huffington Post.

Well, I guess this is as good a spot as any for updates, so here’s a few:

1. My next replay blog project will begin in mid-March and run for about five months with one post a week. I have a Strat Anniversary party to attend in New York on February 12, a draft day in my ECBA league to prepare for after that, followed by a visit to the parental units after that, so yeah, mid-March is about right.  Check back here now and then or on my Twitter page for further details.

2. Not sure what happened, but my Funk Zone archive page on Strat’s Web site has become an incomplete mess, so I’ve included a link here to all nine of my columns in one handy-dandy PDF file.  Enjoy!

P.S. And good luck to my 1931 Athletics, as they go up against Jim Callis’ 1994 Expos in the Seamheads/Strat Anniversary League World Series starting tonight. Lefty Grove?  Meet Pedro Martinez.