Bizarro Night at the Blue Swallow 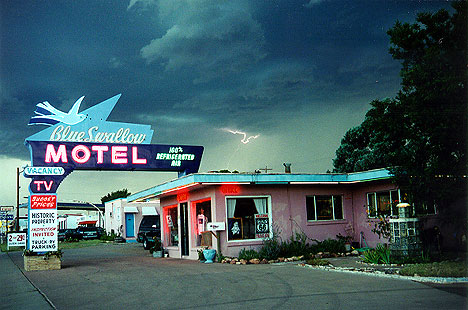 TUCUMCARI, N.M.—I did always want to take Route 66, but never imagined I’d be cruising down it in an old Dodge Coronet with my psychiatrist and five-year-old version of myself in the back seat. We were heading out to California to track down Sherman Wayman, having ditched Lester after a week of dead ends, but it was getting late and it was 107 degrees with heat lightning at sunset and Little Me was starting to freak out.

So we holed up in the Blue Swallow Motel, where we met its nice owner Lillian Redman, who actually got the place as a wedding gift back in 1958. The air conditioner was noisy and trucks were going by off and on, so Little Me had a tough time sleeping and poked me awake around two in the morning.

“Mister? What happened to my Dad?”

I sat up, all groggy, peered over at Sheila in the next bed which he had just climbed out of and saw she had earplugs and a sleeping mask on.

“Well…if I knew that, buddy, I guess I would’ve told you by now, right?”

“Shouldn’t we just go to another Red Sox game? Maybe he’ll be there looking for me.”

“Umm…we can’t just yet, because they’re traveling. Just like we are. But maybe we’ll catch them somewhere in the midwest on our way back from California.” We also needed to check in on poor Seamus Headley at some point, still recuperating back in Cleveland, but there was no point bringing that up. “Carlton? Was your dad…okay when he took you to that game? The one he left you at?”

Even in the dark I could see his little face screw up. “I don’t think so…He said my bad grains were in his head.”

“Yeah. But they weren’t mine.”

“Uh-huh…He said he had my bad grains since Mom died. I’m going back to bed now. Goodnight, mister.” And he did.

But now I couldn’t.

PHILLIES 7-18-1, at CUBS 5-15-3 (13 innings)
Schmidt leads off the game with his 12th homer and the Phils batter Reuschel for three runs, but Big Rick settles down from there, allowing the Cubs to tie the game and pull ahead on a 1-5 chance Gross homer in the 7th. It’s 5-3 into the 9th, Sutter in for his third inning, and no one at Wrigley feels safe. With good reason. Schmidt leads off with his 13th homer. Murcer drops the next pitch for a two-base error. Luzinski and Sizemore whiff, but Hutton and Boone single to incredibly tie the game again. Four innings later off Willie Hernandez, Sizemore hits the go-ahead homer and the sweep is official. McGraw goes six relief innings for the win and will be out for a while.

EXPOS 8-10-2, at CARDS 7-7-4
Denny is sent running for cover and shower water after giving Montreal seven runs in the 2nd, but Rogers, giddy from actually having an offense behind him, lets St. Louis back in the game by giving them a five-run 6th. Kerrigan gets the sweaty save, but the game’s almost-hero is Rawly Eastwick, who stops the Expos cold for six innings after their big outburst.

at CUBS 2-7-1, PIRATES 1-6-0
Inexplicable. The Bucs escape from the Astrodome to Wrigley Field with the wind blowing out. Facing the 1-10 Bill Bonham. With 9-3 Candelaria pitching for them. Bobby Murcer, Chicago’s only home run threat, goes out with a 3-game injury in the 1st inning…And the Cubs beat them 2-1. I guess this must be baseball.

Game One:
REDS 8-14-0, at CARDS 2-9-1
Just like yesterday, a St. Louis starter gets hammered early —Urrea gives up eight—and a far worse pitcher comes in (Falcone) to shut down the opposition. And like yesterday, it’s too late.

Game Two:
REDS 11-14-0, CARDS 2-12-3
Horrendous Cards pitching and fielding, along with Bad Base Hit Management 101 gives Cincy the sweep. It’s so bad that Woodie Fryman gets a win, and to top off the day, Mumphrey, Cruz and Hernandez all get hurt for the Cards.

PHILLIES 9-11-2, at ASTROS 7-13-4
By the time this ungodly slopfest is over, the Phillies find themselves in first place for the first time all year.  Andujar has an off-night, Jim Kaat has a rare on-night, and Brusstar, the only pitcher in the Phillie pen without a dead arm, survives a 9th inning ‘Stros rally by getting Puhl to bounce out with the bases loaded to end it.

at WHITE SOX 4-10-1, YANKEES 0-6-2
More of that piping hot bizarreness you ordered. All three White Sox catchers are injured, forcing Ralph Garr into a mask and shin guards. LaGrow and Dal Canton are both unavailable in the White Sox pen. The Yanks come off a day in Minnesota where they rack up 21 runs and 28 hits…and promptly get shutout by the 0-10 Steve Stone.

INDIANS 5-12-0, at ROYALS 0-5-1
Continuing the acid trip theme, Wayne Garland blanks the Royals on their own Turf, the first time in nine tries the Tribe has beaten them.

ORIOLES 6-10-0, at TWINS 1-6-0
Birds get 13 walks off Minnesota “pitching” and win easy despite grounding into four DPs. That’s weird enough.

RED SOX 12-15-0, at RANGERS 8-9-2
You might think this was a close game, but you’d be wrong. Going to the 8th, it’s 12-1 Boston thanks to three taters off an acid-free Dock Ellis when Tiant gets bored and serves up three doubles and two homers to the Rangers before Willoughby comes on to give Harrah a 3-run homer in the 9th. Stupidly, Lynn and Yaz both get injured for three games toward the end of the blowout.

NOTE: Tonight I’ll be making my first foray into podcasting when I guest host What’s on Second, the Seamheads radio hour with site founder Mike Lynch. Scheduled guests are Chad Finn from the Boston Globe and Bob Wirz to talk about the independent Atlantic League. If you’d like to hear me attempt vocal coherence, the show can be accessed starting at 9 p.m. eastern from the right side of this page.

2 responses to “Bizarro Night at the Blue Swallow”