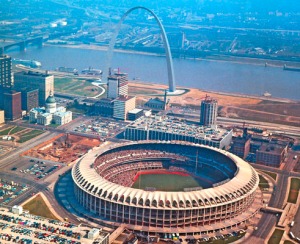 I had my first dream since forever.  I was at Squallpocket Beach with Pam and Timmy, and we were building this beast of a sand castle, and Timmy had potato chip crumbs stuck in the peanut butter around his mouth, and a Go-Gos song was playing on a boom box nearby, but waves were rolling in and the water was flat-out boiling, and Pam screamed and tried to grab Timmy’s arm and then the water was crashing over us and —

Crazy Amy’s pale, once-pretty face was next to mine as my eyes opened. We were in some kind of narrow room with a hump-shaped floor, and morning light was slicing in through these weird slit windows on both sides. Fred was already up, peering through one of them.

“We’re in that big funky-ass arch, can you believe it?”

I coughed and Amy woke up, gave me a curious look.  “You okay?”

“I guess….Just had a freaky dream, that’s all. About my wife and kid.”

“Was, at least. Another Buzz ago.”

“Geez!  The hell with this guy who left you at Fenway! How come you aren’t beatin’ the streets lookin’ for your squeeze?”

She was right, of course. But I didn’t need any more of that craziness. “How about we talk about something else?” I said, “Dave Rader’s the backup catcher here for Ted Simmons, y’know.”

Amy just stared at me, the first time I’d ever seen her close to being caring.

“Never mind him…Say, what position did you play in Little League?”

ST. LOUIS—The Clydesdale clumps have been cleaned off the turf, and it’s a gorgeous weekday matinee at second generation Busch Stadium. Picked to derail the Cardinal express is veteran Stan Bahnsen, but John Denny has the Expos without a hit through four. McBride slaps one into left to with one out in the Cards’ 4th, a wild pitch gets him to second, and Brock plates him with a clean single.

Denny then picks a bad time to lose his stuff. Carter opens the 5th with a double, Valentine singles him in, and after Denny balks, Cash doubles and Montreal skips in front. Cue the next Templeton triple, number 12 in fact, and he’s on a pace to hit 48 of them. With two out, it’s Bahnsen’s turn to throw a wide one, and Garry runs in for the tie game.

Denny gets out of jams in the 6th and 7th, and after a one-out single by Perez in the 8th, Butch Metzger takes over. The Cardinal pitching up and down has been phenomenal, and Metz gets Unser on a fly and whiffs Carter to escape.

Jerry Mumphrey then gets the house rockin’ with a 1-out triple of his own. Hernandez and Simmons follow with doubles, lefty Schatzeder replaces the Bahnsen burnout, but McBride singles anyway to make it a 4-2 lead. Metzger rolls the ‘Spos in the 9th, and St. Louis has won eight straight and now is the proud owner of second place!

And Lester is hopelessly confused because his Cards are going to Wrigley for a weekend series with his last-place Cubs, and he has no clue who to root for. I swear, the guy’s nuts.

PHILLIES 8-12-1, at CUBS 6-10-2
The Phils make it 6-0 on the season vs. Chicago as a tight 3-3 game is blown apart in the 7th on two straight butcherings in the field by Murcer and Mick Kelleher, who’s filling in for Ontiveros at third. Johnstone parks one in the 8th for added humiliation, giving Carlton only his second win of the year.

PIRATES 5-11-0, at ASTROS 3-11-0
The amazing Phil Garner pops his fourth game-deciding homer early on, Odell Jones channels Houdini, and Goose pitches two brutal relief innings to get the save after filling the sacks with Astros in the 9th.

REDS 15-17-0, at DODGERS 4-9-1
Ouch. Seaver gets his first easy win as Doug Rau is put through a Cuisinart by Morgan (on base 5 out of 6 times with three stolen bases), Bench (two singles and a homer), and Foster (homer, single three RBIs). It ends a very shaky home stand for the Blue Boys, who now head for the Astrodome to try and get centered.

YANKEES 6-13-1, at ROYALS 0-5-1
The perfectly reasonable but still shocking just happened. Catfish throws the second straight Yankee shutout at Royals Stadium, as K.C. gets swept for the first time. Two runs in the 1st, 4th and 9th do the trick and even though Piniella goes out with a week-long injury, he still knocks in the eventual winning run. Seven out of eight for the Yanks, as they head back to hopefully Friendly Fenway.

at RANGERS 9-11-1, ORIOLES 4-9-1
Things look rosy early on for the Birds, as they get three in the second off Perry, but Gaylord spits them out from there, whiffing 13 for the day and the Rangers put the game away with five runs in the last two innings.

Everyone back to their ‘hoods this weekend!

American League through Thursday, May 22

National League through Thursday, May 22