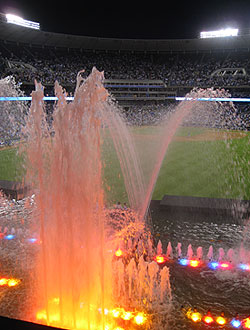 KANSAS CITY—Floating in water isn’t the best way to wake up, but even less so on a cool spring night when the icy stuff is down your pants and there’s other people around you bumping and splashing as they wake up.

The problem was that Mikey wasn’t. He was face down in the Royals Stadium fountain an hour or so before game time, and not moving. Friendly Fred called his name, shook him. Rolled him over. His face was blue, and there was a gash on his head where one of the bottles from that bar in the San Joaquin Valley must’ve hit him the second before we disappeared last night.

“We gotta get out of here before the stadium cops see us,” said Amy, wading to the back edge of the thing.

The timed fountain shot into the air just then, missing Lester’s head by inches and scaring the crap out of us. I clamped onto Fred’s arm, pulled him away. Luckily no one had seen us yet, and we probably had a few minutes before anyone would spot floating Mikey. Amy grabbed a bag of heavy batting donuts from an open equipment shed to sink him with, we found restrooms behind the outfield to dry off, bought a bunch of Royals jerseys and sweatpants, and snagged some empty seats behind the bleachers.

“I don’t need this aggravation,” said Sherman, sneezing into his sleeve for the first two innings, but none of us were happy about Mikey and Fred couldn’t even talk. Mikey was a dumb, violent jerk but he loved the Phillies more than I love clam chowder, and Fred and him had really hit it off since we left the hospital. They were even talking about getting a place on the Jersey shore together and opening a guido/soul brother dating service.

On the other hand, he did break one of the 4-D dice, which screwed up our daily soft landings, which is how he ended up drowning in the Royals Stadium fountain. Pretty strange, too, because three years from now his team will beat the Royals in K.C.’s first World Series in six games, making this some kind of reverse-time warp irony.

I just hope Mikey wasn’t going to get out of the hospital in the future, get his act together and end up becoming President or something.

Jim Bibby takes the ball for Cleveland, and he just died too I heard, which makes this game kind of double-reverse ironic. The Tribe dropped all three to the Royals at the Lake, so they’re out for revenge, and Paul Splittorff helps out by giving up six hits and three runs in the first two innings, helped by an awful two-base error by Mayberry, when he throws a double play grounder past Patek at short with the bases loaded.

And Bibby is ON. He mows down the first eight, whiffing four of them, before a hit batter, Brett single, and scoring force-out by McRae makes it 3-1 in the 4th. Splittorff meanwhile calms down, and two-hits the Indians for the next five innings. Brett raps into a DP but Poquette scores in the 6th, and it’s 3-2.

After Rico Carty doubles to begin the 8th, Manning runs for him, goes to third on a Thornton grounder and gets passed balled home. Think 4-2 is enough? Nope, we’re talking first-place Royals here. Patek doubles right away, and with two outs, one of the best clutchmeisters around Al Cowens smokes one in the gap to cut it to 4-3.

Bottom of the 9th now. Bleacherites around us are rabid, used to miracle comebacks, and it’s hard to believe Royals fans will ever have anything but a winning tradition. With one out Porter singles. Willie Wilson runs for him, steals second on the barely-holding Bibby. But Otis whiffs, and here’s Mayberry with the game on the line. John’s going to make up for that huge error he made, we know it, 38,000 other people know it.

And the ball sizzles into right to score Wilson. Bibby is cooked for the game, but hangs in to whiff Patek and put us into extras. Splittorff gets out of the 10th, then gets Pruitt to line out and end the 11th after Kuiper’s third single of the game, and the typical writing is on the wall.

Jim Kern pitched a scoreless 10th for Cleveland, but now he’s got Brett leading off. George spits out some juice from the tobacco tank in his cheek, leans on his back foot and crushes the first pitch deep to center. Manning takes two steps, turns, and watches it spash into the fountain, 420 feet from home plate, and splash the crowd into a frenzy.

We never got out of a ballpark faster than this one.

Other Action today, and plenty of it:

YANKEES 4-12-0, at WHITE SOX 2-7-2 (10 innings)
Two straight for the Yanks, unheard of lately. A fabulous scoreless pitching duel for eight innings at Comiskey between Catfish and star-crossed Steve Stone, until a Munson single, Nettles double and Chambliss sac fly put New York up 1-0 in the 9th. Hunter hasn’t given up a dinger all day, so Zisk obliges with an upper deck shot leading off the Sox 9th, and we go to the 10th. Randolph singles, Dent moves him up, before three singles in a row by White, Rivers and Munson bring home three runs of winning bacon.

ORIOLES 3-9-1, at TWINS 2-5-1
The Baltimore Thang returns. Stranding runners all night against Geoff Zahn, Pat Kelly going out with their daily 5-game injury, the Birds scrape two runs together in the top of the 9th to steal the game and stay a half game behind K.C. And oh yeah, Lester tells me that he went back through all the scoresheets and saw that Rod Carew now has a 30-game hitting streak. As in, every game they’ve played.

at RANGERS 5-13-0, RED SOX 3-8-1
Boston does the best they can with Evans and Lynn still on the shelf and Gaylord Perry on the hill, but it ain’t enough. Wise makes his first start for the sucky Paxton and sucks just as bad, and after Carbo ties the game with a 2-run shot in the 5th, Bob Stanley comes in for some wicked good long relief, but Campaneris knocks one out and a Burleson error in the 8th leads to two more insurance runs. Alleged Hall of Famer Jim Rice whiffs with two on in the 1st, whiffs in the 4th, and grounds out with two aboard to end the 8th and the Sox down by just one run. I don’t mean to rag on the bastard, but he’s making it easy for me.

at DODGERS 6-9-0, PIRATES 2-10-1
Thrilling, tight battle into the bottom of the 8th, when the Buccaneer ship capsizes. Parker, who’s caught everything out in right so far, drops a Monday fly with two outs after a Garvey single that would have ended the inning. Gossage takes over for Kison, but Baker takes him off the wall for a double, Yeager blasts one into the bleachers and L.A. is suddenly one game out of first.

at ASTROS 1-4-0, REDS 0-3-0
Make it four in a row for Houston since they’ve gotten home. Zero-support poster boy Tom Seaver is brilliant but Joaquin Andujar is brillianter, and a Cabell sac fly in the 2nd holds up.

at CARDS 4-13-1, PHILLIES 2-8-2
Lost in the Pirate-Dodger excitement is the play of St. Louis, who sweep the Phillies (so sorry, Mikey) and are suddenly four games out of first. You can’t stop Heity Cruz, you can only hope to contain him.

at CUBS 3-12-0, EXPOS 2-12-1 (10 innings)
Murcer responds to his manager’s new-look lineup by going 4-for-5 in the fifth spot and starting the willing rally in the 10th. Chicago leaves 13 stranded but hits into zero DPs for a change, and the luckless Don Stanhouse drops to 0-4. Willie Hernandez and Sutter throw nearly six innings of shutout relief.

American League through Friday, May 16

National League through Friday, May 16