A Tale of Two Karmas 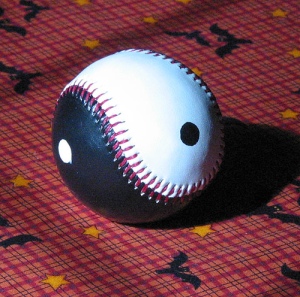 LOS ANGELES—Yeah, we’re still out here for tonight’s second straight Dodger Stadium Game of the Day, and Mikey is one happy hoagie because his Phillies are involved, but as far as I’m concerned it’s been two days too many in L.A. I got a wicked smog headache, and I’m sick of eating pita sandwiches with sprouts sticking out of the pitas. Crazy Amy’s idea of fun is dragging us up a canyon road to see the house where Charlie Manson’s creeps killed Sharon Tate and her friends. Worst of all, it sucks to see the ocean and not smell salt in the air.

So I figure it’s as good a time as any to talk about the weirdness surrounding the Orioles and Yankees so far. I’ve watched a lot of ball and played quite a bit of Strat in my time and I’ve never seen such a perfect mirror image of good and bad luck going on. It’s like an evil dice professor is offering them up as examples A and B in some kind of wacked karma science project.

Baltimore is hitting .248 as a team and New York .247. The Yanks have hit 11 more homers, one more double and 7 more triples, Munson with six himself. But they’ve scored 16 less runs than the Birds and are dead last in the league. The fact they’ve walked 14 less times and been hit by seven less pitches may have something to do with it, and Baltimore’s pitching is a full run better, but there’s more to it than even that.

When the Orioles put men on base, they are usually scoring them with key hits from a huge number of players. When the Yankees get on, the runners fester and rot. Mickey Rivers, despite his .326 card, is at .255 with just three RBIs. Piniella is hitting .243. Nettles has nine homers and an .896 OPS but is batting .205. And as you’ll see below in their first game in Minnesota, when their fielders make errors—Nettles has four already—they pay the price almost every time.

What this also means, from my dice rolling experience, is that the winds of karma are gonna be a-changing. There is no way New York is this bad, and even though Baltimore’s pitching may hold up, I don’t expect the Orioles’ incredible collection of clutchalia to last forever. Then again…that’s why we roll the dice.

I almost toss Mikey out of the upper deck during this one. He’s screaming so loud and so often it drowns out most of the Vin Scully broadcasts blaring out of fans’ transistor radios around us. Are ya ready, folks? Hang on:

Luzinski is plunked in the 1st, knocked out for two games. Reggie Smith announces return from injury by belting Christenson pitch into the bleachers in the 1st. Boone and Christenson doubles in the 2nd tie it at 1-1. Three Phillie singles off Rhoden and a Johnstone grand slam make it 5-1 in 4th. Rhoden isn’t finished crapping the bed, though, gives up Maddox triple, Downtown Ollie Brown double, wild pitch and Schmidt double before being ejected from premises. Two singles, two walks and Garvey single bring Dodgers right back at 7-4.  Phillies meanwhile drop dead at feet of Mike Garman, Stan Wall, and Charlie Hough.Reed relieves Christenson but when McGraw relieves Reed, Garvey says thanks and smacks 2-run homer to make it 7-6.  Garber on for 9th and walks Cey right away. Hebner boots Garvey grounder. Baker walks to load bases with one out. Jerry Grote, only L.A. catcher not ailing, whiffs. Two outs. Vic Davalillo bats for Hough, hits one out to Johnstone to end the game—

Incredible game, but can we go somewhere else now?

at DODGERS 9-12-0, ASTROS 1-4-1
Cripes. Floyd Bannister loses his mind in the 3rd after Houston has taken an early 1-0 lead. Single-single-SB-single-walk-single-walk-walk to begin the inning until Pentz relieves him to whiff the next two, only to have Doug Rau single, Lopes double, and my man Julio Gonzalez boot one at short. Eight runs score, and nuttin’ else, honey.

at CARDS 5-7-0, PIRATES 2-9-0 (12 innings)
Just about a carbon copy of the Astros-Dodgers Mother’s Day game with the Cey waddle-off homer. The Candy Man is cruising with a 2-1 lead, retiring 14 straight at one point, but Simmons ties the game with a right-handed homer with one out in the last of the 9th. After a flood of bad relief outings, Buddy Schultz has another super one, pitching four innings of shutout ball until two walks and a different third baseman named Ken Reitz ends it with a 3-run shot.

at CUBS 5-13-1 REDS 0-6-0
Another smoke job by Rick Reuschel, though Wallis and Biitner will miss the next Chicago game, and the Cubs already have Buckner out.

at ASTROS 3-5-0, EXPOS 0-7-1
J. R. Richard has a few shaky moments but Montreal can’t convert, and Rogers loses another heartbreaker as the Astros make a glorious return to the Dome.

ORIOLES 3-9-0, at WHITE SOX 0-8-1
And with Flanagan’s clutch outing and the usual key Bird blow (Lee May 3-run bomb in the 8th, Baltimore snatches first place from Kansas CIty.

RED SOX 8-14-0, at ROYALS 4-9-1
The K.C. problems are obvious: George Brett injury and a toasted bullpen. The Bosox mop the turf with Andy Hassler for eight runs in the first four innings on a flurry of walks and singles, and by the the time Royals start bashing doubles off Aase, it’s Soup time.  Remember when Jim Rice didn’t even have an RBI yet? He’s up to 16.

at TWINS 8-12-0, YANKEES 3-12-1
As I said, I don’t wanna be around when the Yanks start winning, because it might be bloody. Guidry with his fourth crappy outing in a row, but is given no help by his offense or defense. Rivers drops Hisle’s two-out, bases-filled fly in the 4th, leading to four unearned runs to put the game away. And 14 New York runners are left on base. Against Ron Schueler.

INDIANS 12-17-0, at RANGERS 1-5-3
Eccck is right. And Adrian Devine will have replaced Nelson Briles in the Rangers rotation by dawn tomorrow.

American League through Tuesday, May 13

National League through Tuesday, May 13

6 responses to “A Tale of Two Karmas”